Harbor Country Pride and The Acorn present a Pride Week Wrap Party plus a film screening of Hedwig and the Angry Inch! General Admission is free.

Hedwig and the Angry Inch is a 2001 American musical comedy-drama film written for the screen and directed by John Cameron Mitchell. Adapted from the critically acclaimed off-Broadway rock theater hit, "Hedwig and the Angry Inch" tells the story of the "internationally ignored" rock singer, Hedwig, and her search for stardom and love.

Hedwig develops a relationship with a younger man, Tommy, becoming his mentor and musical collaborator, only to have Tommy steal her music and become a rock star. The film follows Hedwig and her backing band, the Angry Inch, as they shadow Tommy's tour, while exploring Hedwig's past and her forced gender identity. 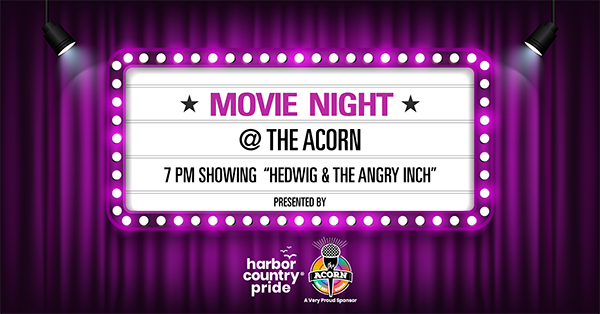