The Music of Boston with Tommy DeCarlo, singer of the legendary rock band Boston since 2007. Tommy has performed on every Boston tour since 2007 playing to sold-out audiences all over the world. This show closes with a full set of Boston classic hits from the 1970's and 80's with a top notch band of touring professionals including August Zadra on lead guitar/vocals (Dennis DeYoung Band), Steve Ferlazzo on keyboards/vocals (Avril Lavigne/Nuno Bettencourt), Mike Morales on drums (Dennis DeYoung Band), Tommy DeCarlo Jr. on guitar/vocals and Payton Velligan on bass/vocals.

The two show package starts with The Music of Journey with singer Rudy Cardenas of American Idol. Rudy is a season 6 American Idol finalist. A full set of Journey classic hits including the hits from both the Steve Perry and Gregg Rolie eras. Rudy has had a long relationship with Journey music starting in 2007 when he debuted on American Idol singing "Open Arms" on national TV. He went on to cover two Journey songs on albums Fly in 2012 "I'll Be Alright Without You" and Son Of A Gun in 2016 "Separate Ways".

Tommy DeCarlo
Born in Rome, New York, Tommy’s interest in music began in elementary school when he joined the school choir. He recalls, “Every year I would try out for one of the lead singing solo parts and every year I never got one. They always told me my voice was too soft.” Many years later, he would show the world that was not the case.

Tommy started playing piano when he was 14 years old, self-taught on an old upright in his living room. And as far as singing goes, DeCarlo explains, “Well, I truly have to thank Brad Delp for helping me develop my vocal abilities. I have said that I never took singing lessons but that's not exactly true. It was Brad who taught me how to sing, even though he never knew it. When I first began to listen to BOSTON as a young teenager, I absolutely loved Brad’s voice and it gave me hope and inspiration at times in my life when I needed it. It wasn’t like I was trying to sing like Brad, it was just that I loved to sing along with him.”

His journey that led to BOSTON happened many years later when in 2007 he posted BOSTON cover songs and other music on his myspace page, and even wrote a song in honor of Brad Delp upon his passing. Hearing of a tribute being planned, Tommy reached out to the band offering to sing should they need any additional vocalists. “I sent an email to the BOSTON camp which included covers of the songs Smokin' & Don't Look Back, never thinking I’d get a reply."

Several weeks later, Tom Scholz happened to hear Tommy’s cover of “Don’t Look Back,” and was shocked. Knowing every nuance of Brad’s voice, he could not believe that this was not Brad singing, exclaiming, “I haven’t heard anyone else sing like that in 35 years.” Scholz contacted Tommy and invited him to come and sing a few songs at the Brad Delp tribute. DeCarlo’s reaction was, “I would have never believed this could happen in a million years. The next thing I knew I was on my way to Boston to sing with BOSTON … are you kidding me?"

Tommy was asked to join BOSTON on their 2008 tour and has sang on every Tour since. Prior to that, Tommy was working as a credit manager at The Home Depot, had never been in a band, and the largest crowd that Tommy had sung in front of was a talent show in high school. Tommy has been touring and playing to sold out audiences all over the world!

In 2012, Tommy co-founded with his son, Tommy Jr., DECARLO. The band released their original debut album 'Lightning Strikes Twice' in 2020, earning them a featured article in popular BILLBOARD MAGAZINE as 2021 Grammy® contenders. Their chart topping hit 'You Are The Fire' went viral on streaming platforms world-wide shortly after its release.

Rudy Cardenas
Born in Venezuela and raised in Colorado, Rudy is no stranger to music and loved performing from the get go. “I was always in music,” states the singer. “I was in choir, in bands, participated in theatre since I was young. I continued this passion for music throughout middle school, high school and college.”

In 2000, Rudy graduated from the University of Northern Colorado with a degree in vocal performance, and then moved to New York where he pursued musical theatre. Not too long after, Rudy landed the role of Peter in Jesus Christ Superstar and Riff Raff in The Rocky Horror Show.

Rudy eventually made his way west to Seattle and joined the award-winning group M-Pact. “We toured all over the world doing what we loved” states Rudy. It wasn’t until 2004, when he and the group decided to move to Los Angeles that things began to happen. Just a year later with Rudy as lead vocalist, M-Pact was named vocal group of the year by L.A. Music Awards.

Rudy is perhaps best known as a season 6 American Idol finalist. Since Idol, Rudy has spent the last 15 years in the LA music scene performing musical genres including Rock, Classical, Jazz, and Latin to create a sound all his own. He works in the LA session scene lending his vocals to TV and film projects like Family Guy, Modern Family, Reel Steel, Spiderman and more. Rudy has had the great pleasure of sharing the stage with such acts as BabyFace, Kenny G, Stevie Wonder, David Foster, Lionel Richie, Earth Wind and Fire, Harry Connick Jr., Bruno Mars, Sheryl Crow, and Kid Rock to name a few.

In 2012 , Rudy released a solo album of original music called Fly that included an acoustical cover of Journey's song "I'll Be Alright Without You."

In 2016, he was the featured singer in collaboration with famed Hungarian guitarist Zsolt, garnering his first gold album with Son Of A Gun that included a cover of Journey's song "Separate Ways".

In 2020, he released an album of original music with his new band Waiting For Monday that includes band mate August Zadra, available on Frontiers Music. 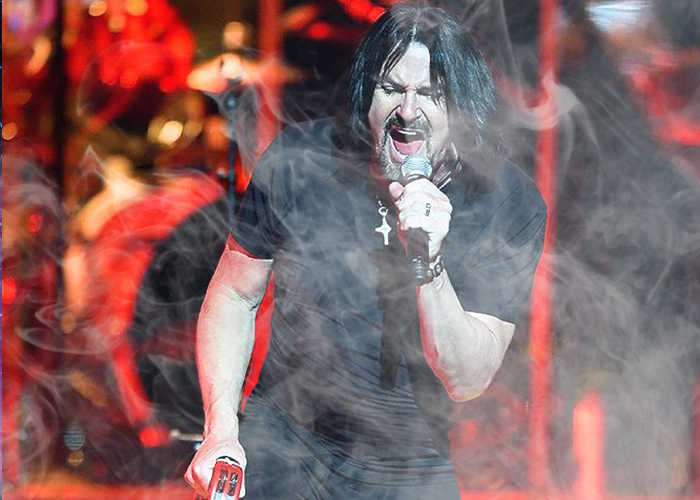