An Acorn Evening with Mark Giangreco: Hosted by Janet Davies

In the next installment of our new series – “An Acorn Evening with…” – Janet Davies will serve as the guide for a fascinating conversation with Mark Giangreco.

In Mark’s own words: “It all started at a small 5,000 watt station in Dayton, Ohio. A young kid and a crazy dream.”

Mark Giangreco is a native of Buffalo, New York, a 1970 graduate of Canisius High School and class of 1974 from the University of Dayton. His loves include old school R & B and classic muscle cars.

Janet Davies was the entertainment reporter for Chicago’s ABC 7 for over 30 years. She was also the host and executive producer of 190 North, a multiple Emmy award-winning Chicago-based entertainment and lifestyle program. Janet has received numerous awards, including 18 Emmy awards for hosting, producing, writing, and reporting. 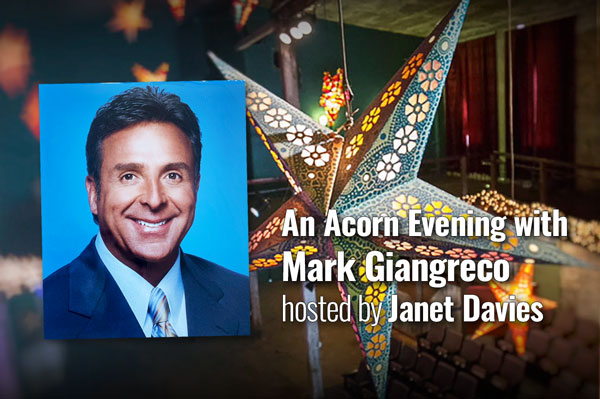