The critically acclaimed Ike Reilly Assassination perform their gritty and hard-driving music as part of Acorn Anywhere!. This show take place on the stunning grounds of La Lumiere school in LaPorte, IN.

Since his explosive major label debut, Salesmen and Racists, Reilly has been creating rebellious punk/folk/country/blues-influenced rock ’n’ roll records that are poetic and cinematic. Critical praise for his work has been plentiful, and he has garnered a wildly loyal fan base -- from faithful fans in the dirty bars and rock clubs in the middle of nowhere to legendary authors. Reilly’s songs have a unique universality that affects people. Author Stephen King wrote that Reilly’s travel band saga, “Boltcutter,” was “the best new song to come out of the Trump era.” The New York Times called Reilly’s longtime band, The Assassination, one of the best live bands in America, and once again they show their dexterity and growth on Reilly’s new offering, Because the Angels.

This compelling batch of new Reilly songs/tales required both a lighter touch and a ferocity that mirrors the depth of Reilly’s writing and the varied nature of his songs. On “Ashes to Ashes,” the band slams away and yet still holds down the groove to this Ray-Charles-on-speed track. As the band rocks, rolls, and rumbles, Reilly sings of the cursed and the blessed, the loved and the hurt, and he assures us that nobody escapes death. Sure, it’s dark, but ya might die trying not to move to this track.

Of his work, Reilly dismisses it and says, “My songs are either lies or apologies.” Because the Angels may reveal more truth than maybe he would like. “Trick of the Light,” the first single released off of the new album, is a dark-pop-celebration of family dysfunction. Here, we find Reilly ironically sharing lead vocal duties with three of his own children. There is a festive innocence and a wise resignation in the vocal delivery as Reilly and his boys trade lines and ask questions about faith, hope, family, money, and fate.

This is a BYO event! Bring your own beverages, snacks and chairs.

RESERVED SEATING option includes a $25 tax deductible donation to The Acorn and guarantees you a seat near the stage with optimal sight lines. $25 Donation per ticket holder in your group. BRING YOUR OWN CHAIR.

THIS EVENT IS RAIN OR SHINE 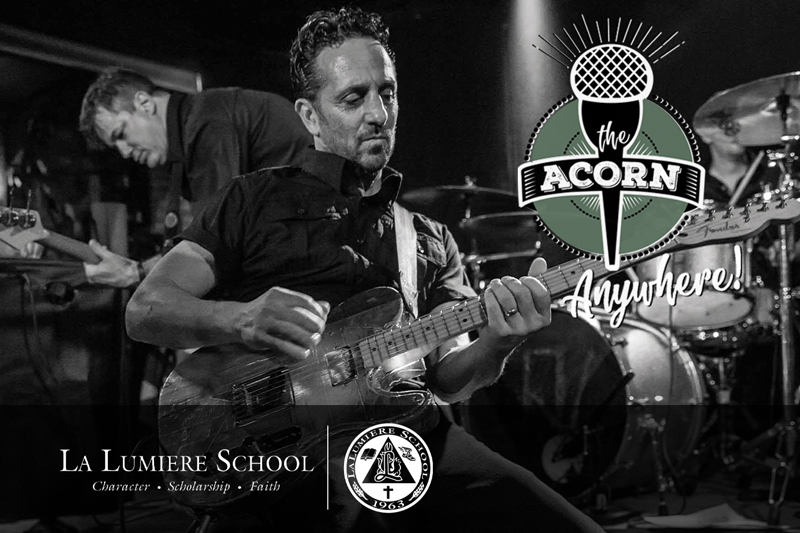