Tab Benoit at The Acorn

Tab Benoit is a Grammy nominated singer, songwriter and guitarist who has built a remarkable 30+ year career in music. His gritty and soulful Delta swamp blues has attracted a devoted legion of fans along the way. He is a recipient of 5 Blues Music Awards, including BB King Entertainer of the Year (twice), and he has been inducted into The Louisiana Music Hall of Fame.

Tab's accomplishments as a musician are matched only by his devotion to the environmental health of his native Louisiana wetlands. Benoit is the founder and driving force behind Voice of the Wetlands, an organization dedicated to the preservation of the coastal waters in his home state. In 2010, he received the Governor's Award from the Louisiana Wildlife Federation for Conservationist of the Year.

Benoit also starred in the iMax motion picture 'Hurricane on the Bayou,' a documentary about Hurricane Katrina's effects on the environment and different methods used to protect and restore the wetlands.

As we listen to the guidance coming from the CDC, it is important that we are proactive in our approach here at the theater. We ask for your help in keeping our community safe by supporting our new indoor show mask requirement at The Acorn. Click here to see our COVID-19 Policy. 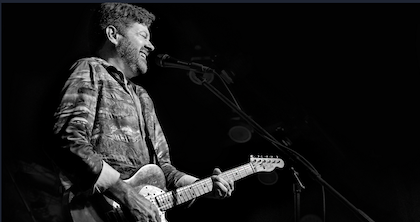